In the past 25 years, the BCAA have supported many research projects in Antarctica, and concurrently stimulated a great deal of research in the analytical and environmental chemistry fields, facing the challenges related to the ultra-trace analysis of polar matrices. This activity is briefly illustrated below via few, representative research works we recently focus on. For a complete review of the studies related to BCAA, you are invited to check our list of publications. 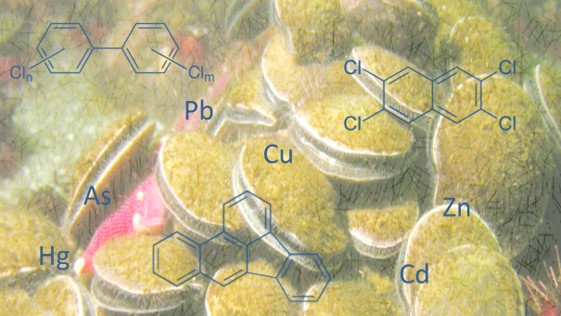 Marine organisms can accumulate pollutants from the surroundings and the analysis of their tissues can hence provide information on the chemical contamination in the environment they live in.

In this study, eighty specimens of the scallop Adamussium colbecki, a key species for biomonitoring pollution in Antarctic ecosystems, were analyzed to quantify trace elements and persistent organic pollutants, including polychlorinated biphenyls (PCBs), polychlorinated naphthalenes (PCNs) and polycyclic aromatic hydrocarbons (PAHs). The samples, archived in the BCAA from 1996 to 2009, were simultaneously analyzed in 2014-15, using the latest analytical procedures and instrumental techniques that were not yet available at the time of collection.

It was found that metals concentrations were not affected by anthropogenic contributions, highlighting a natural accumulation with the age of the organism. Similarly, no temporal trend was evident for PCNs, PCBs and PAHs. However, specimens collected during the summer 1997-98 showed enhanced concentrations of PCBs and PAHs that could refer to a local anthropogenic source of contamination.

Arsenic is important both from a toxicological and environmental point of view and, like other trace elements, its behavior is strongly dependent on the physical and chemical properties, toxicity, mobility and biotransformation of individual arsenic species. Antarctic ecosystems provide the unique opportunity to investigate the natural accumulation and transformation processes of arsenic, because the food webs are relatively simple and the contamination from anthropogenic sources is negligible.

In this work, tissues from a range of marine organisms (algae, mollusks, sea stars, sea urchins, sea worms, fish), collected from coastal Antarctic sites and stored in the BCAA from 1997 to 2004, were analyzed to quantify arsenic compounds and compare the results with those from similar studies in temperate and tropical waters.

It was found that the major compounds were arsenobetaine and oxo-arsenosugars, with their relative proportions depending on the position of the organism in the food chain and, for some species, on the type of tissue analyzed. Several minor compounds were also found, and their concentrations were significantly lower in muscle compared with the other tissues. The transfer of the arsenic through the Antarctic marine food web and the speciation patterns found in the organisms were similar to those reported for comparable organisms from other marine ecosystems, supporting the view that the high levels of arsenic occurring in marine samples is a natural phenomenon. 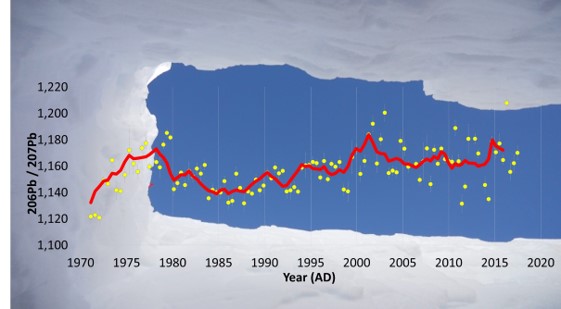 Lead is a toxic trace element that can be transported over long distances by the atmospheric circulation, reaching the most isolated regions on Earth, like Antarctica. Here, it is accumulated in snow by dry and wet deposition, so its determination in snow samples with well-constrained ages can provide information on historical changes of lead in the atmosphere. Moreover, the precise measurement of its isotopic composition allows us to identify the natural and anthropogenic sources and to track the possible transport pathways.

In this work, a record of lead concentration and isotope ratios was obtained by the analysis of 109 snow pit samples collected from the East Antarctic Plateau, corresponding to the period 1971-2017.

It was found that the temporal variations of lead isotopic composition from 1970 to mid-1990s reflect the changes in the consumption of leaded gasoline in the Southern Hemisphere, whereas the subsequent increase of the lead isotope ratios can be ascribed to a shift toward the natural isotopic signature, in agreement with the concomitant decrease of total lead concentration. Accordingly, the anthropogenic lead contribution decreased from 61±3% in 1980-1990 to 49±10% in 2010-2017. Furthermore, the measured ratios suggested that Australia has been a significant source of anthropogenic lead to Antarctica, even in recent times.